On Wednesday night I ventured out for a concert that started after my bedtime. I’m an old lady in that I like to eat dinner early and be in bed by 10pm on a week-night. But, I’m a big fan of Celtic Thunder. They have beautiful voices and aren’t hard on the eyes either. So, when I learned that Ryan Kelly and Neil Byrne were going to be doing a solo (duo?) acoustic show after they stopped in Charlotte on their PBS tour, I knew I wasn’t going to miss it.

Last year Keith Harkin, another of Celtic Thunder’s performers, had a solo show at the same venue with newbie to the group, Emmet Cahill. I missed out on that show because I didn’t want to go alone and my new (now former) friend/coworker wouldn’t join me. This time, I messaged the “Celtic Thunder Fans of NC” group over on Facebook and got a warm welcome. So I decided to brave it alone. 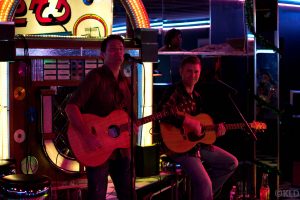 After being in line for two minutes, I made three friends! Meghan, her husband Dan, and Dan the Romanian. Dan #2 used to frequent the venue, Bopper’s Bar, and had no idea what a Celtic Thunder was… Meghan is a huge Ryan fan, and her husband came along to keep her company. I made several other friends throughout the night as well.

Ryan and Neil were an hour late (to the already at my bedtime show) because the TV station kept them late (damn you WTVI). And of course there was another 20 or 30 minutes of sound check. It was worth the wait though.

Ryan sang “Moondance,” one of my favorite songs. Since he had to fly back to Ireland the evening I saw the (official) Celtic Thunder show in Jacksonville, Keith sang it in his place. It was still beautiful, but I think it works better with Ryan’s voice.

Let’s see, I didn’t write down their set list, or record any of the songs, so I’ll try to remember some good ones. There was: Moondance (of which you’re already aware), Friends in Low Places, Sadie Jones, Seven Drunken Nights, In Too Deep, Point of Rescue, Every Breath You Take, California Dreamin’, Rock and Roll Kids, Galway Girl, and lots more. They ended the night with a little Monkees medley, which I think was great and a tasteful like homage.

After the show they stuck around to sign things, take pictures, and give hugs. I think I even saw a few cheek kisses! I’m not a big autograph girl, I don’t understand the allure of a scribble of ink. But, I did get a picture and thanked them for taking the time to do the show for us. They were leaving right afterward, heading up to Roanoke, sleeping on the bus I suppose.

Even though I didn’t get to bed until 2am, it was a wonderful night. I’m very glad I sucked it up and went alone. I made friends, listened to great music played live, and the only thing I didn’t do, but wish I did, was eat some of the tasty looking cake!